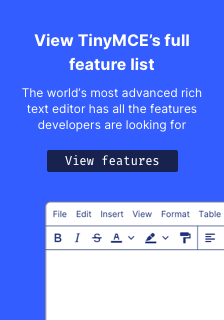 TinyMCE is an incredibly powerful, flexible and customizable rich text editor. In this section, we show you the power of plugins with several working examples.

Contribute to this page

Because most people install TinyMCE via TinyMCE Cloud or by downloading a package, they mistakenly think plugins are part of the TinyMCE "core". While all of the plugins (excluding the professional features) are included in those packages, each plugin is in a separate .js file. In fact, if you use the custom package download option, you're able to select only the plugins you want to be included, or you can exclude all of the plugins built by the TinyMCE team.

In this section, we'll show you how easy it is to activate a plugin by highlighting two of the more popular plugins.

Note: You must include the plugin in your download options to activate it.

Let's start with a simple code snippet you can paste into an empty html file (call it whatever you like, tinymce.html works). Save the file locally, open it with your web browser and you'll have a basic, local TinyMCE instance up and running.

The code we want to work with is in the second <script> element. Specifically the key and its value, which we pass as JSON to the tinymce object .init method. In the example above selector is the key and 'textarea' is its value.

The Code plugin is one of the more popular plugins because it can expose the editable area's raw html to the user. It also provides an excellent example because it adds a menu item and toolbar button as well as having advanced customization options.

The first thing we need to do is include the actual plugins key and assign it a value. Since we're starting with the code plugin that value is going to be 'code'for this example.

Add plugins: 'code' to your tinymce.html file, save the file, refresh your browser and you'll see some magic. A "Tools" menu automatically appears in the menubar, and it has a "Source code" item in the drop-down. Click it and voila, you can now edit the HTML hidden by the WYSIWYG interface.

Let's also add a toolbar control so that our users can more easily activate this functionality.

Impressive! We now have a button on the toolbar users can click to get into source code mode, but we lost our default toolbar controls. We explained why this happens back in the Basic Setup, so if this behavior surprises you, please re-read that section.

Many plugins have customization options that give developers granular control of the editor. The code plugin is no exception, and it has two options available to us, which respectively change the height and width of the dialog box's (internal) editable area. These are code_dialog_height and code_dialog_width.

Let's add them as values to our tinymce.init() object/method.

Save the file, refresh your browser and when you next click the "Source code" toolbar button you'll have resized the dialog box.

Time for one more example

Even if you found the above example quite easy, hang with us we'll show you how to extend TinyMCE's default ordered and unordered lists. If on the other hand that was all a bit new, read this example to help your understanding.

As before, let's start by adding the plugins key and giving it the Advanced List value of 'advlist'.

Take a look at your TinyMCE toolbar, and you'll see the list controls now have down arrows attached (to the right of the icon). Click them, and you've now got extra list options.

There are more customization options if we don't want all of those list options available to the user.

The advlist plugin has two options which provide more granular control of list styles. These are advlist_bullet_styles and advlist_number_styles.

Don't worry if you can't remember all these values. The plugins section goes into great detail explaining all the plugins options, toolbars, and menu controls.

Let's add the Advanced List options and give them some of the available options.

In the above example, we learned how to remove the menubar, add specific list controls to the toolbar while removing others, activate a plugin, and customize the plugin's behavior by controlling which options we wanted to be activated. In 5 lines of code (excluding the selector key, which has to be included for TinyMCE to work).

As we noted at the start TinyMCE is an incredibly powerful, flexible, and customizable rich text editor. Once you've finished the Get Started guide, deep dive into the plugins and configuration options.

Customizing TinyMCE with the default plugins is that easy. There are 40 default plugins available to developers. Let's take a look at the 10 most popular plugins (by documentation page views).

Was this article helpful? Yes - No

Well, that's awkward . Would you mind opening an issue or helping us out?

Thanks for the feedback!

Can't find what you're looking for? Let us know.