Contribute to this page

TinyMCE 5.3 was released for TinyMCE Enterprise and Tiny Cloud on Thursday, June 11th, 2020. It includes TinyMCE 5.3.2 and additional changes to premium plugins. These release notes provide an overview of the changes for TinyMCE 5.3, including:

Note: This is the Tiny Cloud and TinyMCE Enterprise release notes. For information on the latest community version of TinyMCE, see: TinyMCE Changelog.

The following new features and enhancements were added for the TinyMCE 5.3 release.

TinyMCE 5.3 includes a new default, auto, for the toolbar_location option. The auto option positions the toolbar and menu bar either:

This new default setting has been added to improve the user experience for the editor in inline mode.

A new “Find in selection” option has been added to the Find and Replace dialog provided by the Search and Replace plugin. 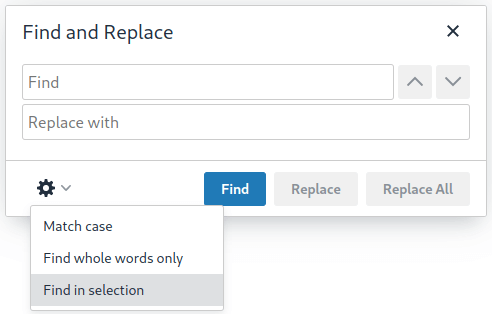 For information on enabling the Find and Replace dialog, see: the Search and Replace plugin.

For information on using the language setting and a list of supported languages for Tiny Cloud and premium self-hosted deployments, see: Localization options - language.

The following premium plugin updates were released alongside TinyMCE 5.3.

The TinyMCE 5.3 release includes an accompanying release of the Accessibility Checker premium plugin.

The TinyMCE 5.3 release includes an accompanying release of the Comments premium plugin.

The TinyMCE 5.3 release includes an accompanying release of the PowerPaste premium plugin.

PowerPaste 5.3.0 adds a new imagedrop source which fires an event when dropping an image file into the editor. This source can be used with the PowerPaste paste_preprocess and paste_postprocess options.

Java 7 support has been removed with this release. The TinyMCE Java server-side components now require a minimum of Java 8. From the TinyMCE 5.3 release, the .war files provided in the self-hosted bundles will not be compatible with Java 7. This change resolves security issues present in the older versions of these services. The following plugins are affected by this change:

Three new http timeout settings have been added to the server-side components. These new settings provide greater control over the timeout length of requests that the existing request-timeout-seconds configuration setting.

The images_dataimg_filter option has been deprecated with the release of TinyMCE 5.3 and may be removed in a future release of TinyMCE. This option can be used for an unintended use-case that will likely be incompatible with the future introduction of real-time collaboration support.

This section describes issues that users of TinyMCE 5.3 may encounter, as well as possible workarounds for these issues.

No known workaround at the time of release.

No known workaround at the time of release.

Upgrading to the latest version of TinyMCE 5

The procedure for upgrading to the latest version of TinyMCE 5 depends on the deployment type.

To upgrade to TinyMCE 5.10 using a manually downloaded package:

Note: To simplify the upgrade process to future versions of TinyMCE:

Was this article helpful? Yes - No

Well, that's awkward . Would you mind opening an issue or helping us out?

Thanks for the feedback!

Can't find what you're looking for? Let us know.